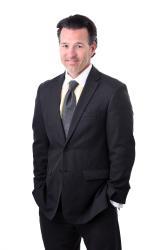 Sean Cloyes partnered with Steve Berken to form Berken Cloyes in 2016. Sean graduated from the University of Nebraska with a Bachelor of Arts degree. He also obtained his Juris Doctorate from dear old Nebraska U. Sean is a member of the Colorado Bar Association. He is admitted to practice in Federal and State Courts and Agencies in Colorado. Sean joined Kinnaird Cloyes & Kinnaird, P.C., in June 2001, becoming a partner in 2005. From approximately 2005-2014, Sean was chair of the El Paso County Bar Association Bankruptcy Subsection, during which time he taught semi-monthly CLE’s to other attorneys and served as a liaison between the Colorado Bankruptcy Court Judges and the El Paso County Bar.

Though a native Nebraskan, Sean considers Colorado home and enjoys mountain biking, wakeboarding, hiking and playing softball when not spending time with his wife and two kids.